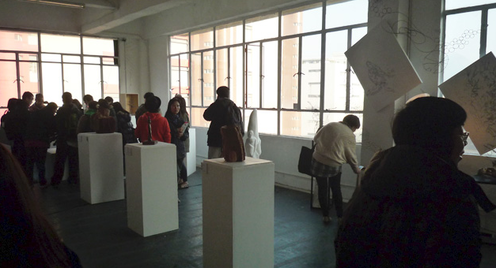 The Fotanian Open Studios has its roots in 2001, when eight artists from the Chinese University — Lam Tung Pang, Tozer Pak, Tony Ma, Sam Tang, and Gordon Lo — relocated to the industrial neighborhood of Fo Tan after their studio burned down. The group took up residence in the Wah Luen Industrial Building, which now hosts 47 art-related units ranging from shared artist spaces to galleries and design offices, not to mention the studio of ex–Chinese University professor Lui Chun-Kwong.

The artists named their newfound space Studio 318, and that first year, they hosted 318 Studio Opening Show, while Lui presented the work of Lee Kit, a longtime resident of Wah Luen who has since relocated. The next open studio took place in 2003, after which the event became an annual happening and was officially named the Fotanian. Since then, an artistcommunity has blossomed, and public attention has grown. By way of example: this year, some three hundred artists participated, showing in spaces in 15 of Fo Tan’s industrial buildings over three weekends in January.

This year’s event also inaugurated government sponsorship from the ArtsCapacity and Development Funding Scheme, recently launched by the Home Affairs Bureau, as well as a corporate collaboration with Puma. Of course, these funding successes have also raised a number of issues, namely the fear that the event’s success and the attention it has brought to Fo Tan could lead to rent increases brought on by art’s Midas touch.

The Fotanian is one of Hong Kong’s most popular art events with the local public. This popularity is an achievement in and of itself, given the fact that Hong Kong is famously a place where people are not as interested inart as they are in shopping or money. Nevertheless, with a series of seminars and symposiums organized on such topics as Art and Social Change or Subconscious Symbols, an Art on Road mobile exhibition program, as well as guided tours, the public reach of the Fotanian appears to be growing. This is nothing but positive in terms of creating an audience for fine art that did not necessarily exist ten years ago, considering the only attendees of the 318 Studio Opening were pretty much the artists and their friends.

Given how much Hong Kong proper has changed in the past few years to become the shopping mall of China, the Fotanian is also an antidote to the dominance of international designer bling on the city’s once diverse landscape. Nature is a key element here: this is one part of the city, the New Territories, that has been left relatively unscathed by the hyperdevelopment that’s taken place in Hong Kong over the past decade.

Elephant Vanishing, who explores the potential of Chinese calligraphy as a contemporary practice, moved to Fo Tan four years ago. In that time, herart practice has expanded from using ancient Chinese characters to explore light and shadow through video to producing site-specific installations related directly to the view from her window: Fo Tan’s lush and green hills. This year, the artist, who sees herself as “nature’s apprentice,” presented a mapping of shadows that have been projected into her studio space by the tree constructed out of crumpled calligraphic works on paper that she presented last year.

Elephant’s studio is located in Wah Luen’s B block, which also hosts Kiss on Fire, a studio shared by Benson Cheung, Lam Chak-fung, Winnie Lau, Fai Wong, and Yeung Ching-sing. Kiss on Fire is a wonderfully vibrant space in which artifacts collected by the artists that are evocative of old Hong Kong were serenaded in an artist’s performance on the day of my visit.

Next door, We Sculptors presented a more streamlined approach, with an exhibition of work by the artists occupying the unit: Kitty Chan, Chris Lau, Crystal Ho, Lo Hang-wai, and Mak Yee-man. There was also a wonderful installation of paintings by Tsang Chui-mei at Qiang, works that, again, interact with the view outside and recalled a visit I made to Fo Tan three years ago, to Lam Tung Pang’s studio, also located in Wah Luen. Lam is a painter with a distinct sensibility that engages with nature as a traditional motif in Chinese painting and is almost aesthetically antagonistic to the hyperbranding prevalent in Hong Kong’s urban spaces.

What is most interesting about the Fotanian is the diversity of practices there. There are design studios that produce everything from jewelry to product design and galleries that present both established and emerging artists. There are also a slew of foreign names now, a change most artists and regular attendees of the event have noticed, attesting to the fact that the Fotanian, which has essentially been in operation for over a decade, isentering a new, more evolved phase.

This could be a good thing, as many of the older inhabitants, such as Wong Tin-yan, a graduate of the Chinese University who came to Fo Tan ten years ago, admit, but it’s also problematic. The event’s popularity could signal the demise of those who made it a success in the first place. Interest in the industrial area and its potential will inevitably lead to rent hikes — the bane of all artists working in a city where space is the ultimate commodity, and where artists are often the first to suffer from the speculation of it.