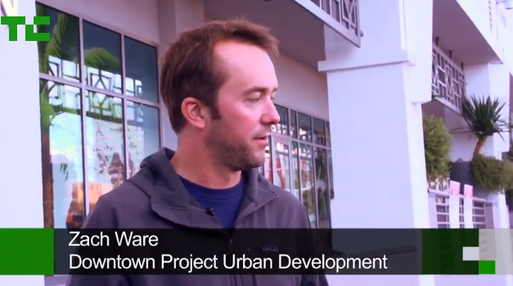 Click on link above and then click the video link connected to the pic at beginning. (same text as below, but the video is there)  Although long, the 5:30 time mark (The Beat) and 10:30 (Work in Progress - Workspaces) times on video are interesting.

A Walk Through Downtown Las Vegas, Where A New Generation Of Startups Is Taking Root [TCTV]

TechCrunch TV recently mde the trek to Las Vegas, where we had the chance to check out the burgeoning startup community that’s taking shape there thanks in large part to a $350 million initiative called the “Downtown Project.”

When many people think of Vegas, they think of the casino- and tourist-filled area known as the Strip. But the Downtown Project, which is headed up by Zappos CEO Tony Hseih, is focused on bringing new life to what’s also known as “old Vegas,” an urban area that’s rich with history (it used to be the playground for the likes of the Rat Pack) but is now ripe for revitalization.

The startup scene that’s growing in Downtown Vegas is the kind of thing that’s best understood by seeing it, so we took a walk through the area with Zach Ware, who is one of the most prominent characters in the core group of people working around the clock to make the Downtown Project happen. Ware’s without a doubt one of the most well-versed on the whole situation, so it was apleasure for him to take us through the streets of old Vegas and talk about how the area has changed recently and the vision for its future.

And since Ware is also one of the co-founders of Work In Progress, a project that’s bringing a host of new coworking spaces to the Downtown Vegas area, we ended our stroll at one of those construction sites. You can see all of that in the video embedded above.
Powered by